Adelphi Acre Community Garden is the result of a grassroots effort to create a thriving social space where neighbors can come together, grow together, and learn together.  Inspired by a mother’s effort to introduce new foods to a picky toddler, it was quickly realized that the community garden vision for the neighborhood was a very popular idea for neighbors of all ages. 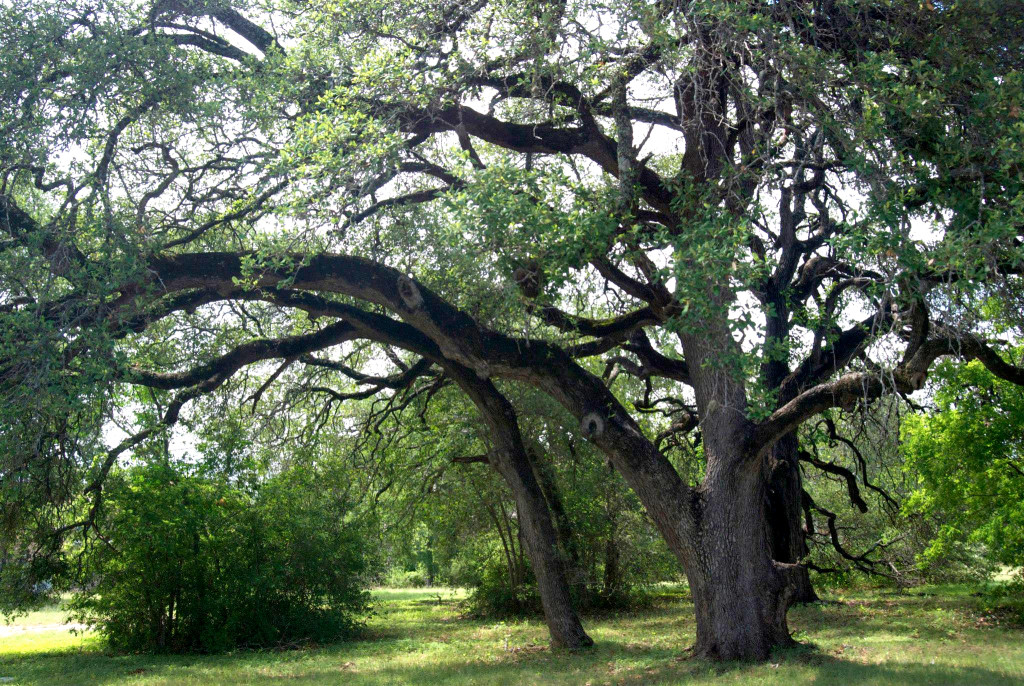 In March of 2013 beginning research started on the process, permits, and path that would need to be taken to make the garden a reality. After a few weeks of research and organizing an approach, on April 29th, 2013, the first e-mail was sent out to Walnut Crossing to gauge the interest in pursuing the garden effort.  The initial proposed location was in Balcones District Park along the Scribe entrance. Milwood Baptist Church also generously offered some of their land for a community garden, but with the goal of grant funding and city endorsement, many neighbors suggested that we look into the ROW easement on the SE corner of Adelphi Lane and Amherst Drive.  Within a few weeks we were granted permission to begin planning the community garden by the City of Austin Public Works department and from there the process to build a committee, engage a community, decide on a name, achieve sponsorship, endorsement, grants, and work through challenges began.

As part of the process to become officially endorsed by the City of Austin, the steering committee decided to apply to become sponsored by the Sustainable Food Center of Austin (SFC). During these first few months we quickly took on new volunteers and built a strong list of future garden plot holders and community supporters.  The feature that attracted so many people to the current garden location was the presence of a small grove of trees anchored by three heritage oaks that provide a complete canopy and proved the perfect location for a park-like community area. Reclaiming this area became the garden’s first priority.

The garden received endorsement from the City of Austin in November of 2013 so then we started working on funding and applying for grants. One of the grants applied  to was the Neighborhoods Partner Programming Award. This is a grant to help empower neighborhoods by funding community projects and improvements. In January of 2015, we were awarded a grant from this program in the amount of $99,447 to build Adelphi Acre. This amount included cost sharing matched by our neighborhoods with volunteer hours and in kind donations.

After receiving the grant the team began the arduous process of site planning and re planning the layout of the garden and future water lines. The site is situated on City Right of Way land with utility and water lines running underneath. In addition to this, the site host several heritage oaks which are protected. Protecting these oaks and not disturbing the critical root zone was imperative. Luckily the neighborhood is home to an arborist employed at Cleanscapes and they graciously offered to trim the oaks, remove invasives, supply us with mulch and maintain the oaks in the future.

Many revisions later, we finally received the license from the City of Austin to build in July of 2014! We had successfully navigated the paperwork, ordinance, regulation maze of  the Urban Forestry Department, Sustainable Parks and Recreation Department and Public Works department.

Now that we could officially build onsite, the first project completed was the construction of the large picnic tables under the oaks that we established as the community area outside of the garden. The funding, planning and construction of the tables were the result of Paxton Eagle Scout Project. He and Eagle Scout Troop 511 constructed and painted the tables onsite. We were the recipients of another Eagle Scout project from Dawson. He designed, funded and with the aid of the troop constructed the 18 watering stations throughout the garden.

Our first official Build Day was held in October of 2014, even though we’d held many work days prior to clean up the area, mulch, start outlining the perimeter with the limestone rocks donated locally and marking out the fence lines and garden plots. In early 2015, our water lines and taps were installed and we started building the fence and raised garden beds.

With soil in the beds and spring fast approaching, Adelphi Acre opened in April 2015,  just over 2 years since the inception. The rainy spring paused long enough for our ribbon cutting and Grand Opening.

Since our opening we’ve continued to grow and develop out new  within the garden.  During this process we have received three wonderful new girl scout projects that have added to the beauty and function of our garden.

Our Children’s Garden is now a buzz with beautiful thriving fall vegetables and hosted the first ever Adelphi Acre Seedling Children’s Workshop in September. Children had the opportunity to dig and plant transplants, learn about the parts of the plant, walk across the stepping stones, do craft projects as well as participate in a scavenger hunt.  Our Education Stewardship Team is currently putting together a group of projects and activities to share with youth groups eager to tour the garden.

Our Donation beds are now fully operational with all produce being grown, harvested, and delivered once a week to the local food pantry located at Covenant United Methodist Church on Duval.

Adelphi Acre has been lucky enough to have the services of Neal Charles of NCLD, a talented Landscape Designer who created the initial concept sketch, and who served as project manager leading the build out effort. While we’ve had numerous revisions to our site layout to fit shifting city regulations, this is the drawing that inspired our current design and still inspires us today. 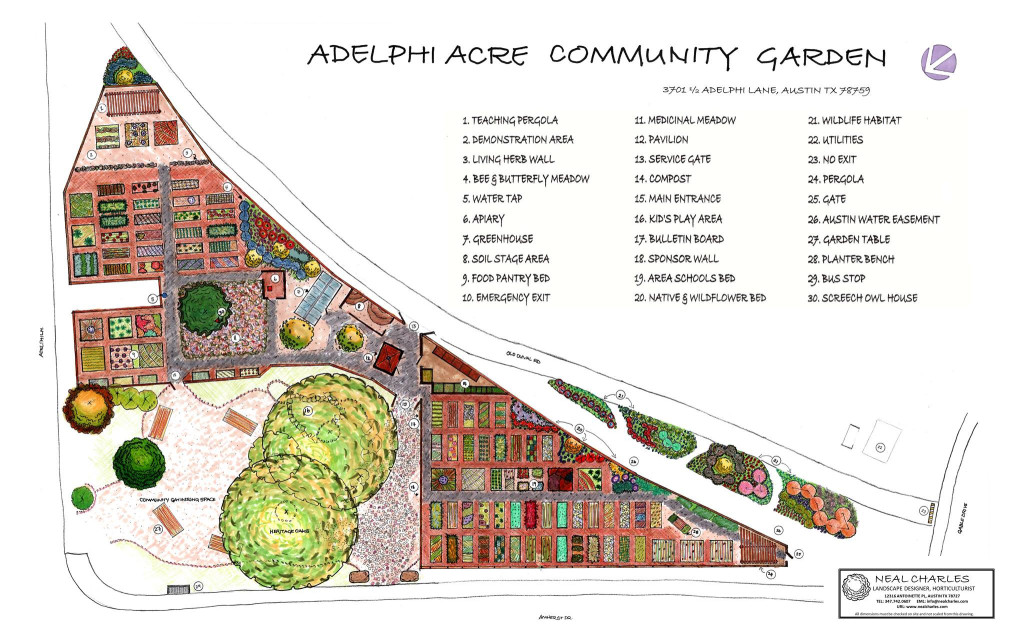 Adelphi Acre Community Garden is endorsed by the City of Austin Park and Recreation Department (PARD) and sponsored by the Sustainable Food Center (SFC.)  Grant funding is provided through the City of Austin’s Neighborhood Partnering Program (NPP.)